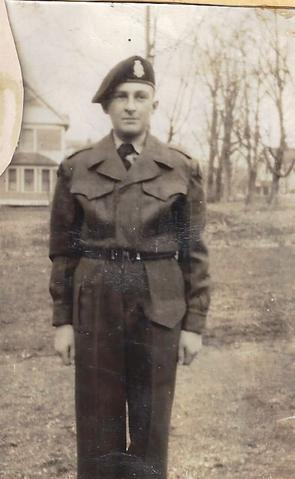 Scovil Brown My DOB 20/02/1934 Born in Farnham Quebec19 45 .Father had massive stroke ,as we had NO income and we were 5 kids . We moved home to my mothers old home in Hampton. I948 Veteran members of the 8th Hussars must have recognized the need at home and took me into the regiment long before I was eligible. I joined the 8th NB Hussars ( PL) (M) HQ Sqn Hampton March 1948. Did all the basic training required weekends & Driver/ Mc/Wheeled at Christmas & Easter Camp at Camp Sussex. Did Driver/Mc/Track Gp 1 at summer Camp Petawawa 1949. Went to Gunnery Range at Tracadie (NB) Live firing 76mm, Sherman M4A2 -E8 Fall 1949 Camp Sussex Christmas & Easter And was on the parade when the Medal was presented to the Regiment by the Mayor of Eelde,Holland the CO was Lt Col E D George MP Unsure of the date in 1950.
Went to summer Camp at Camp Utopia (NB) On advanced party.later on Rear party.1950 . Regular training Christmas & Easter Promoted L/Cpl that year. 1950 Attended summer camp at Utopia 1951 also promoted Cpl that year.
Attended Summer Camp at Utopia on a Leadership Course 1952,I recall that I went to camp on call out to open the Camp Utopia.... missed my School Graduation,, No Suit, Pictures, or Ring ....No money,that ,went home for food. four kids at home .My Dad a WW1 Veteran became totally paralyzed (stroke)1945 we had no income. Thank God For the Hussars !!!! I continued to serve in the Hussars till Feb 1955
Joined the regular Force, Royal Canadian Dragoons At Camp Petawawa...Had to revert from Cpl to Trooper,that was how it was then . Feb 1955 Did basic training all over again all trades training I had to do again as the RCD's had Centurion Tanks and so the BS went on. Winter of 1956 Did winter indoctrination North, While there we where re called to Petawawa and told we would be going to Egypt as the Suez War was on going.
Jan 1957 ..... The 56 Recce Squadron ( United Nations Emergency Force) was formed and left for Egypt in February. We Got our Ferret Scout Cars 18 or so , at Port Said Egypt. Moved across the Egyptian desert to the Gaza Strip , Rafah. We slept in the open on the ground ,no sleeping bags then ,just one wool blanket. The tour was one full year on hard rations ( NO FRESH FOOD) 2/1/2 gallons of water per man per day to drink, wash and cook. in 45 c heat every day...we were young and "Dumb" We worked every day on patrol day light till after dark In the hot sun. then a two hour shift of guard every night. It was one night while on guard at 3 am sitting on top of my Scout Car I asked the question of my self WHAT TO HELL AM I doing here ?? It was then that decided to transfer to the RCDC. It took five years to get the transfer. It came through in 1962 in Germany.

1958 returned to Canada .Dropped off of a RCAF North Star Plane after a three day flight from Egypt, at Dorval Airport (Montreal) with two Kit bags of kit and told "Find your own way to the down town Montreal railway station in a snow storm. No thanks nothing.I assumed that was the way it was Just happy to be home in Canada. March 1958 Reported to Camp Gagetown to the 1/8th Canadian Hussars (PL) C Sqn where I was detailed to kitchen duty for one month(Washing dishes By hand for the whole regiment ) I was the new kid on the block...the reward for serving. !! Oct 1959 Sent to Germany as part of the rotation. Dec 25th 1959 Wife and child arrived at Dusseldorf Airport as I was the duty driver the day I was assigned to pick them up with a service VW Car Served a very tough three years of NATO schemes endless parades,bug outs, and Compulsory church parades, along with a 51/2 work week. Dec 1962 We were all packed and ready to leave Germany for Canada when my transfer to the Royal Canadian Dental Corps came through. So I had to revert to a Private from Cpl. It just so happened that the Cuban Crises took place and the Regiment along with the Whole Brigade were on stand by. Jan 1963 Arrived for duty at HMCS Esquimalt, Dental Clinic , Victoria BC The next years were very intensive training period, before the year was ended I was promoted to full Cpl and the next year to a Sgt. In the year I made 4 trips from Victoria to CFB Borden on courses etc. 1964 On staff at Royal Rhodes Military Collage Clinic . 1965 Posted to CFB Vancouver Dental Clinic and Temp duty to CFS Holberg, Chilawack,etc . 1968 Posted to No 1 Dental Unit, Ottawa, RCDC HQ and CFB Rockcliff. also on staff at the National Defense Medical Center. 1970 Promoted Warrant Officer and spoke french 1971 Posted to CFB Valcartier Chief Laboratory Tech. 1974 Promoted MWO 1975 Retired Canadian Forces 1975 Awarded A Diploma of Denturism U of M Quebec, 1977 PQ Party Elected . 1977 Moved Back Home to Hampton, New Brunswick , Opened a Denture Clinic.

This fonds Consists of photographs of WW 1 German Cemetery in France.which Contains 40 000 graves of German soldiers . The crosses are made of iron and there are four graves to each cross.