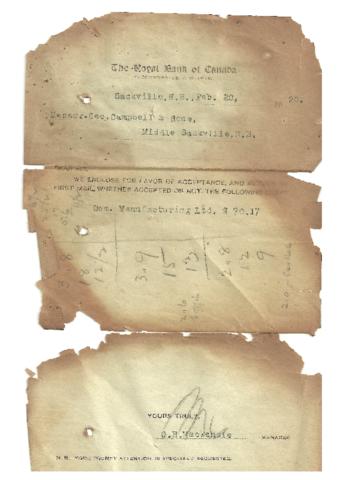 Ronald Campbell emigrated from Scotland and was the first Campbell known to Sackville. He married Margaret Keenan in 1829 and began his business in 1855. His son, George Campbell, became a manufacturer of carriages in Middle Sackville, as well as a Funeral Director. The building which was George Campbell and Sons’ carriage building facility was originally built as a tannery in 1838 by John Beal. It was purchased and converted into a carriage factory in 1855 by Ronald Campbell. Up until 1949, when the factory finally closed its doors due to the rising popularity in automobiles, the George Campbell and Sons Company produced horse-drawn vehicles, tools, agricultural equipment, and caskets. Subsequent generations would branch out into both hay dealership and undertaking. After closing its doors, the tools and contents of the factory remained relatively undisturbed until 1998 when William and Barbara Campbell donated the old factory to the Tantramar Heritage Trust.

Item is a document made out to Messrs.Geo.Campbell & Sons, which reads, “Dear Sir, We enclose for favor of acceptance and return by first mail, whether accepted or not, the following draft: Dom. Manufacturing Ltd. $70.17”. Document is signed by G. H. MacKenzie, Manager