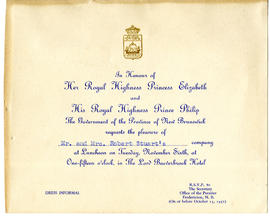 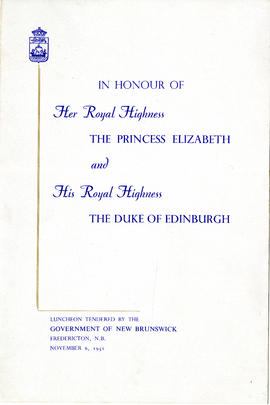 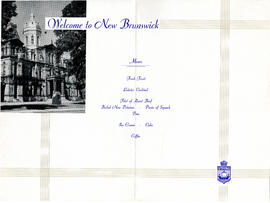 Prior to 22 February 2010 these items were housed at the University of New Brunswick's Archives and Special Collections Unit, located in the Harriet Irving Library.

This collection consists of items relating to the Royal Visit of Princess Elizabeth (now Queen Elizabeth II) and the Duke of Edinburgh, to New Brunswick, in November 1951. These include an invitation to a luncheon at the Lord Beaverbrook Hotel, in Fredericton, in Honour of Her Royal Highness The Princess Elizabeth and His Royal Highness, The Duke of Edinburgh, November 6, 1951; two tickets to the luncheon; two place cards; and the dinner menu.

There is also an invitation from the Minister of Resources and Development and the chairman and members of the National Film Board, to the premiere of the film, "Royal Journey", the official film record of the Canadian tour of Their Royal Highnesses, The Princess Elizabeth and The Duke of Edinburgh to be shown at the Gaiety Theatre, in Fredericton, on December 23 [1951]. The premiere showing was under the distinguished patronage of His Hon. the Lieutnant Governor of New Brunswick and Mrs. MacLaren.