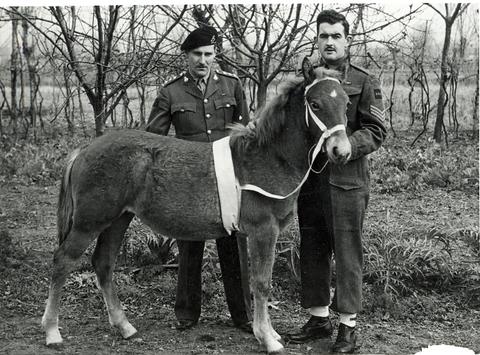 The Second World War was the first time the Hussars left Canadian shores as a Regiment. In July 1940, the Regiment was mobilized to form the 4th Canadian Motorcycle Regiment. In February 1941, the Canadian Army converted the Hussars to armour and became the 5th Armoured Regiment. The Regiment sailed for England at the end of August, 1941 and was stationed in England until November, 1943 when it sailed for Africa. The Regiment later sailed to Italy and landed in Naples in December. The Regiment fought through Italy, winning battle honours until February, 1944 when it sailed to France to begin the journey to the campaigns in Belgium and Holland. It was in Italy that the first Princess Louise, the original Regimental mascot

Series consists of photocopied photographs and 6 actual photographs of the horse, Princess Louise in Italy and on her arrival in Canada. A booklet called A Colt that Became a Hussar by Douglas How and a Autobiography of Princess Louise I written by Lt. Col R S McLeod plus newspapers articles.