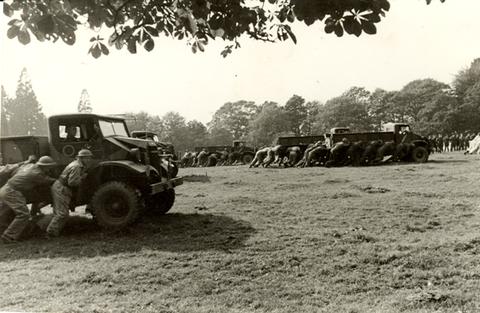 Tom McLaughlan first joined the Hussars in 1963, and as a young trooper, relished the day he got to drive one of those Shermans so proudly waiting in the old Tank Hanger at Camp Sussex for some unsuspecting young trooper to jump into the drivers seat. Needless to say when he retired from the Regiment in 2003, his 404’s still had Sherman D & M added to the list and he had survived the crossing of Trout Creek and many other bone jarring obstacles with out too many marks and scars.
After completing his degree at the University of New Brunswick, Tom came back to the Regiment in 1974, and joined B Sqn as a troop leader. From there he advanced to BC and OC B Sqn and in later years moved to RHQ in Moncton to take up numerous positions including two tours as the Regiment 2IC. In addition to his normal duties, he was an avid competitor on the rifle team and attended the national DCRA competition at the Connaught Ranges in Ottawa on a number of occasions, winning a national title in 1981 in both the two man and four-man LAR rifle category. He also has taught at the NATO School SHAPE in Oberammergau, Germany.
Currently he is serving on the Board of the new Hussar Museum in Sussex and is developing some new ideas to expand and enhance the site.
He currently works at CFB Gagetown as the Base Environmental Officer and resides in Lincoln, NB. He has two sons, both serving with the Canadian Forces. Both boys moved from B Sqn in the Militia Regiment to A Sqn of the Regular Regiment before moving on to other postings. Currently Captain Shawn McLaughlan is serving with 4 Engineer Support Regiment in Gagetown and is attending the University of New Brunswick. Maj Pat McLaughlan is with the Royal Canadian Dragoons and is currently posted to Ottawa.

This series consists of 17 photographs including; Start of the Jeep Pushing competition. 8NBH third from near side, Ron and MacDougall on bumper end. Merritt and McEwen on rear side. Keirstead and Boyer on far side. Lt Col Robinson at the wheel, B Squadron of the 28th Dragoon at Camp Sussex in 1913.