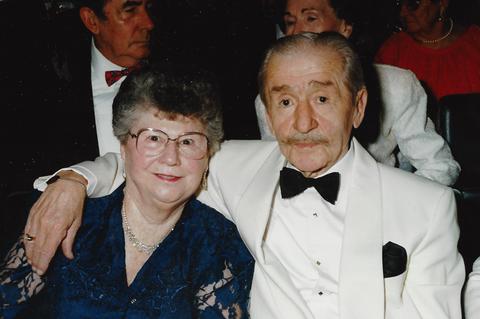 Charles Huggard was born in Springfield< King's County NB on 9 November 1912. He enlisted with the Non-permanent Active Militia in 1928 serving until 1931. Subsequently, he reenlisted with the militia from 1934-1939. Thereafter, he enrolled in the Canadian Army (Active) Infantry Corps with the Princess Patricia Light Canadian infantry. He was promoted in 1940 to Company Quartermaster. He ended the Second World war as a Captain. During the Second World War, he served in Italy, France, and the Netherlands. He volunteered to join the Pacific Force in 1945. After World war II, he continued with the Regular Army, serving in Korea. He would be awarded the American Bronze Star for his actions during that conflict. Charles was promoted to Major in 1950 and continued serving until he was honourable discharged in 1963. Charles Huggard died in 1995, age 82.
Alleyne (Silver) Huggard, the wife of Charles, served with the Canadian Women's Army Corps (CWCA) during World War II. Alleyne was born 16 May 1921 in Galt Ontario. She enlisted 7 September 1942 in Toronto. She worked as a bookkeeper prior to the outbreak of the war. She was certified as 2/Lieutenant 29 July 1944 after completing the Officers Training Course.