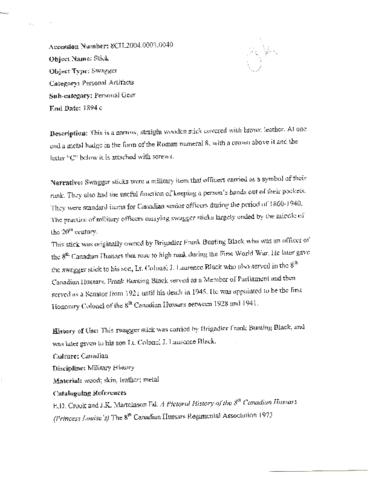 The vision of a Museum for the 8th Canadian Hussars originated in 1981. A little over two decades later, members of the Association created the Museum Committee to oversee the Museum and, in conjunction with the Centennial of the Town of Sussex, the 8th Hussars Military Museum was opened n 2004. It is located in the Historic Sussex Train Station. The Museum focuses on the history of the 8th Hussars within the wider Canadian Military Context. Our collection encompasses artefacts from the American Rebellion of 1776-1783, the Boer War (1899-1902), the First World War, the Second World War, Peacekeeping, the Cold War, and Afghanistan.

Papers from the upstairs of the 8th Hussars Museum left in a box with a label reading "archive".