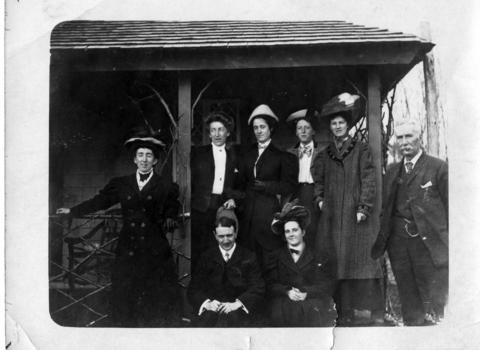 In 1824, Joseph Read and his father opened a stone yard office in Boston, Mass., and in 1860 they purchased a grindstone property in Stonehaven, New Brunswick from Sprague Spoule & Company. The lack of stone available for making grindstones in New England meant that the stone had to come from the Maritimes or England. In New Brunswick, stones were produced at Lower Cove, Ragged Reef, Sand River, Apple River, Wood Point, Rockport, Grindstone Island, Mary's Point, Beaumont and Fox Creek. The Reads came into ownership of around 40 quarries throughout the Maritimes which remained open until the company's closure in 1930. At the time of its closure, the Read Company owned 51 schooners which took stones to ports in the northeastern United States, South America and the Caribbean, then on to England carrying rum.

Joseph Read first began quarrying grindstones in 1810 when he leased a section of shoreline at Minudie, Cumberland County, Nova Scotia from Amos Seaman, who was also in the business. Joseph Read's son, Joseph, Jr., expanded the business, opening a stoneyard for grading, distributing, and selling grindstones at Boston in 1824. Joseph Read, Sr. entered into partnership with John T. Seaman, and the company expanded its operations to Rockport, Dover, and Beaumont. The Reads' record the founding of their company as 1824, possibly the year that the partnership of Read and Seaman was formed. Minudie remained the company's base of operation throughout the 19th century.

In 1856 the enterprise expanded when another stone quarry was opened at Stonehaven, Gloucester County, New Brunswick. By 1900, the company had moved its base of operations to Sackville, N. B. and was now producing building stone and pulp stone along with grindstones. In 1908 the business was incorporated under the name Read Stone Co. Ltd., at which time the quarries and businesses of Joseph Read, of Stonehaven, and Henry C. Read, of Sackville, were consolidated. The company's business interests extended from New Brunswick to Montréal, West Virginia, and Ohio. H. W. Read closed the quarries at Stonehaven in 1930. Read Stone Co. Ltd. surrendered its letters patent on 10 February 1954.