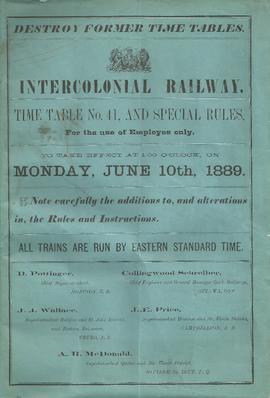 Original letters and attached news clippings received from Mrs. Brenda (James) Ford, Coppastiona Tree Farm, R.R. #3, Moncton, (Stoney Creek) NB to the Department of Transportation (often the Deputy Minister) and copies of the responses sent to these letters, 1967-2007. She and her husband ran a tree farm and were very interested in rural beautification. Some of the letters were prompted by the actions of their neighbours who had brought unsightly buildings to their properties or buildings which were obstructions to safe motoring.

Dominant themes in the letters include an issue regarding the paving of a highway interfering with the Ford's driveway, complaints regarding the Petitcodiac River Dam Causeway, and issues regarding the Gunningsville Bridge. Other topics include building removal from highway right-of-ways (particularly the Helen Steeves (McGrath) house in Moncton), signage regulations on highway right-of-ways, frog crossing signage, easements of right-of-ways, controversy regarding changes to the Weldon highway (includes deed and mortgage for Hartley property), forestry consultation, elections of MLAs particularly the Confederation of Regions (CoR) party (1991), criminal activity in the Ford’s neighbourhood and an RCMP inquiry, mail theft, billboards, tractor-trailer roof icing, harassment by tractor-trailer drivers of female drivers, beautification of Route 114 (includes poem), the Adopt-A-Highway program, railway transport (CNR and CPR), NB usage of gravel trucked from Quebec and its relation to the spread of ragweed, Protected Areas Strategy for forested areas, paving of Highway 114 (includes photos), and drinking and driving of a neighbour of Mrs. Ford. There is also correspondence regarding continuing confidentiality where Mrs. Ford explains how she protects the security of her letters (1991).

There is also a copy of “Terms of Reference: A Risk Assessment and Emergency Response Program for the Corridor Road Passing Through Baker Brook, Verret, and Saint-Jacques Watersheds” from the NB DOT, 1993, including maps, and obituaries of James Amos Ford (1882-1979) and Brenda Ford (1921-2012).

Fonds consists of personal papers and also includes records belonging to Ethel Peake, some given to Smith or possibly borrowed or received following her death and used in his research for biographical note "Ethel Marguerite Peake, 1885-1954" (accession 8426). Peake files contain correspondence 1908-1943; biographical brochure [between 1923 and 1936]; clippings; Mount Allison Department of Music student records, 1936-1944 (students of Peake); photographs, including several of Peake; Allison G. Patterson file, 1951 and 1981.

Material related to the LGBTQIA2S+ purge of the Canadian Armed Forces, and Diane Doiron's personal experience.

Records pertaining to Herbert L. Logan and the First and Second World Wars include circulars, telegrams, and photographs relating to the New Brunswick Rangers; messages and orders from commanding officers relating to the 7th Field Hygiene Section of the Royal Canadian Army Medical Corps; a postcard of the 7th Field Hygiene Section; identification cards, permits, tickets, shoulder patches, and military buttons; propaganda leaflets dropped by the R.C.A.F. over Germany in German (1930s); handbooks and booklets; the constitution of the Canadian Legion of the British Empire Service League [191-] and other material pertaining to the Canadian Legion; and newspaper clippings.

The collection also includes the constitution and 3 membership booklets relating to the Loyal True Blue Association that functioned at Youngs Cove, Queens County, in the 1920s and 1930s; a general store account book for John M. Brown's general store at Quaco, N.B., (1877-1880); accounts relating to the steamboat St. George and the steamer John Ward (1830s); the Intercolonial Railway Time Table of Trains conveying Their Royal Highnesses, the Duke and Duchess of Cornwall and York from Saint John to Halifax, 1901; an English Speaking Citizens Committee of Moncton "reply to French propaganda," issued in 1934 to counter two circulars reportedly broadcast in Moncton and area by the Assomption Society of Moncton; and commercial advertising leaflets, letterheads, bills of sale and accounts pertaining to businesses in Albert, Westmorland, and Saint John counties. Of particular interest is an announcement issued by T. H. Estabrooks, of Saint John, of the launch of the "Estabrooks' Red Rose Coffee", [1901?].

A series of six albums of 1,527 postcards collected by Ethel Anderson from 1905 to c.1911 and were donated by the executors of her estate as stipulated in her will and a series of 26 leather postcards.