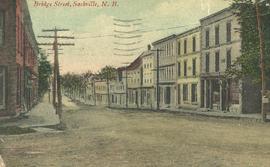 It consists of minutes of Sessions, minutes of congregational and Board of Trustee meetings, and church registers (communion rolls, baptisms, marriages, burials). Also included are minutes of the Women's Missionary Society, the United Church Women, and of the Red Bank Cemetery Committee as well as a pew rental book for the Salmon Creek church.

Fredericton Baptist Church Board of Trustees

The fonds consists of correspondence with members of the first Baptist church in Fredericton, New Brunswick and the extended congregation, reports from ministers on special missions and ministries and financial records.

This collection contains diaries and reports of weather, visitors, the times when the light was lit and turned off, and the length of time operating each day. The records were kept by the Grand Harbour lighthouse keepers from 1949-1960. There are also blank forms of Hand Horn or Fog Bell Returns.