This fonds includes personal correspondence of the Harding and Reed family, 1805-1849; wills and deeds primarily in Maugerville parish, 1775-1909; accounts and receipts of Capt. Jonathan Harding , 1793-1843; and receipts and accounts of other Harding family members, 1845-1849. There are also notes about the Reed and Harding families and a silhouette labelled Catherine Reed.

This fonds consists mainly of correspondence exchanged between members of the Moore family in Fredericton and their relatives in New York State. The bulk of correspondence is addressed to either Maria (Moore) Carman or Eliza Moore. There are six letters from the 1830s addressed to Sarah Carman from her daughters-in-law in Bathurst, Musquash and St. Stephen. Also included in the fonds are legal documents such as deeds and estate and military papers.

The correspondence reflects the daily lives of upper class Loyalist women in New Brunswick. It also documents the ongoing connections with family in the United States and the movement back and forth for the generation growing up after the American Revolution. The women discuss their personal and social lives, as well as the lives of mutual friends and relatives. There is advice about the foolhardiness of a premature return to New York, interesting commentaries on the significance of correct spelling and grammar (written by an aunt to a schoolgirl), reports on sea travels, discussion of marital difficulties, expressions of anxiety over the possibility of renewed war between England and the United States and description of life in Bathurst, New Brunswick in 1830.

Documents have been separated into correspondence and legal papers. Each in turn has been arranged chronologically.

This collection consists of materials compiled and prepared by Charles MacDonald during the course of his research. It includes notes, pedigree charts, newspaper clippings, copies of letters and land petitions, and portrait photographs and sketches of family members. The families represented in this collection are MacDonald, Keirstead, Delong, Beebe, Shearer, Mann, and Erb.

The collection contains a muster roll of Captain John Fraser's company of the 1st Battalion of Gloucester militia based in Bathurst, 1839-1842. It includes lists of men at each annual muster, with their rank. The roll covers the period of the Aroostook War when the militia was called out throughout New Brunswick. It includes a list of aliens resident in the district for each year.

Also included are three letters, 1799-1800, from Alex Fraser to his parents in Inverness-shire, Scotland. They recount his voyage from Fort Augustus to Glasgow, then onward to Cove (Cobh), Ireland and St. Vincent in the West Indies. There is a letter dated 1812, appointing Alex Fraser to the militia in Inverness. An album containing coloured Christmas cards and a very few Easter and St. Valentine's cards from 1878 is also included. Four photographs of the family have been transferred to the Photograph Section.

Also included are records of the Order of British Templars-Bathurst Lodge, including two copies of a Degree Book printed in Saint John (1867), a copy of a typed speech given by Miller, two books of accounts, and a listing of books missing from the lodge library (1874). There are also printed advertisements for Massey Harvesters and Steinberger Hendry Company globes.

The fonds contains photocopies of nine letters written by Michael Keef from various communities in the United States to family members residing in the Saint John area of New Brunswick -- eight letters were addressed to his brother William and one, to his mother Jane.

The letters report on family matters and family activities, including Michael Keef's move to Alleyton, Michigan in the 1870s. These letters highlight the mobility of families during the mid- to late 19th century, particularly across the Maine-New Brunswick border.

This fonds consists of several handwritten pages. Two leaves were removed from the back of a Bible, the back page recording a brief list of the important dates in Thomas Saunders' life. There are also 20 handwritten leaves removed from a bound volume, containing arithmetic exercises with the answers, probably intended as a textbook for Saunders' students. On the final leaf is a list of family births and deaths, 1834-1907.

This fonds consists of bills and receipts for household and personal expenses of the Colin Campbell family. Most are for food, clothing, hairdressing, furnishing, painting, "the girls" schooling, and funeral expenses for "our dear little boy." There are also a few legal and financial papers. 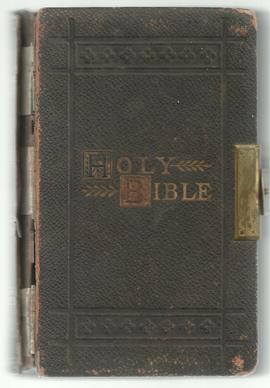