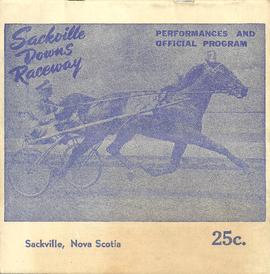 Item is a blue and white square program with advertisements on the top and bottom of each page. End page details components of harness horse equipment.
"Sackville Downs Raceway Performances and Official Program"

This collection contains issues of the Argosy Weekly, a newspaper published by and written for students at Mount Allison University of Sackville, New Brunswick. It includes issues published in 1938, which feature news articles, creative writing, and columns of interest to students.

Item is a framed photograph of the 1905 Sackville Town Hockey team with their Provincial Championship trophy pictured in the centre.