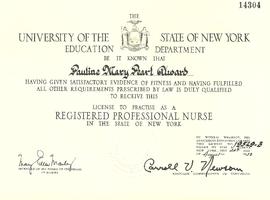 Certificate from University of the State of New York

Item is a certificate issued to Pauline Alward by the University of the State of New York Education Department, licensing her to practice as a Registered Professional Nurse in New York. 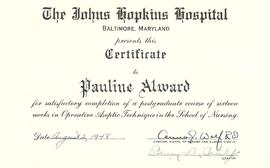 Item is a certificate for the completion of a postgraduate course in Operative Aseptic Technique at John Hopkins University. 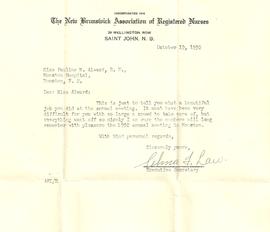 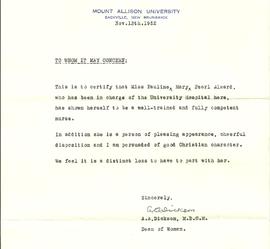 Item is a reference letter from Anne Dixon, Dean of Women at Mount Allison University, written “to whom it may concern” about Pauline Alward’s position as nurse in residence. 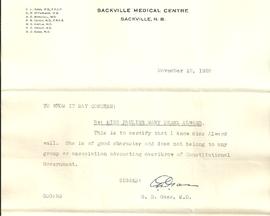 Item is a letter signed by Dr. George Gass dated November 12, 1952, which stated that Pauline Alward was “of good character and does not belong to any group or association advocating overthrow of Constitutional Government”. During the McCarthy era, this type of recommendation would have been required in order to move to the USA to work. 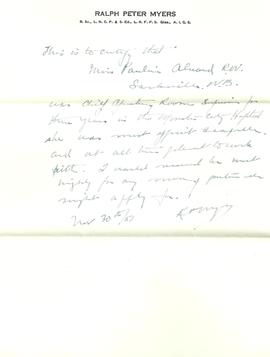 Item is a letter of recommendation concerning Pauline Alward, written by Dr. Ralph Meyers who was on the staff of the Moncton Hospital. 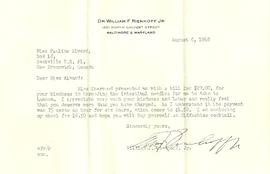 Item is a letter addressed to Pauline Alward from Dr. William F. Reinhoff, one of the surgeons that Pauline scrubbed for while taking her course at John Hopkins Hospital. The letter thanked her and included payment for the threading of intestinal needles for him to take on a trip to London for doing surgeries. Original envelope is included. 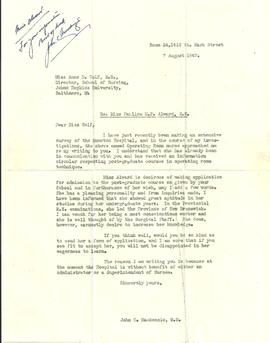 Item is a letter written to Miss Anne DeWolf RN, the Director of Nursing at Johns Hopkins University, Baltimore, from John C. MacKenzie, MD. He requested an application form for Pauline Alward to attend a course at John Hopkins, as the Moncton Hospital at that time was without an administrator or a director of nurses. In the top left corner, Mr. MacKenzie has written, “Miss Alward – For your information. Best of luck, John C. Mackenzie”. 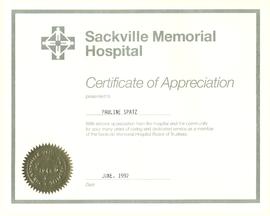 Item is a certificate of appreciation given to Pauline (Alward) Spatz from the Sackville Memorial Hospital in June 1992.