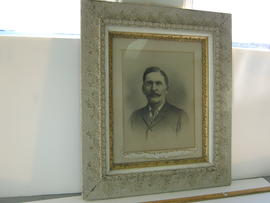 This black and white solar photograph is a portrait of Walter B. McLaughlin(1829-1906) as a middle aged man with short trimmed hair and a handle bar mustache. He is wearing a light colored suit jacket and a stripped tie. The solar print has been enhanced with charcoal or pencil to sharpen the image. The frame is very elaborate and made of many layers of frames. The matting has water damage but the image does not appear to be damaged. 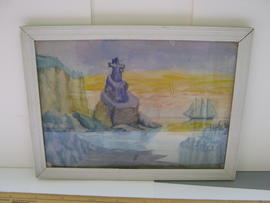 This item is an original watercolor by Sherman Lawson. It is framed in a manufactured frame painted white with glass. The painting is a view from the shore looking out at the rock formation The Southern Cross. There is a three-masted boat in full sail on the water and the cliffs are in the foreground. The sky is yellows and blues and pink of a sunset. There are some water stains on the painting. No signature is visible.

This fonds consists of manuscripts and historical documents pertaining to the Archibald and Longworth families, and Colchester County, Nova Scotia, towns religious groups and family genealogies. Also, included are addresses and lectures by Mr. Longworth, Longworth and Archibald legal and business documents, and a collection of newspapers and journals.

Fonds consists mainly of records created and accumulated by Pomeroy as biographer and friend of Charles G.D. Roberts, Canadian poet. Records document Roberts' work, including his interests in the Tantramar area of New Brunswick, and his relationship with Pomeroy as well as Pomeroy's activities as collector and interpreter of Canadian literature mainly between 1920-1950. Files contain correspondence; published and unpublished poetry and prose by Roberts and other Canadian authors of the time; scrapbooks; photographs; postcards; clippings.

Records belonging to Marshall Saunders and Mary Electa Adams were given to Pomeroy, and are included.

A bibliography of Pomeroy's publications is included in the fonds.

Fonds consists of records created and accumulated by members of the Tweedie family, including William and Dorcas (Calkin) Tweedie and their children William Morley Tweedie, Leora Rebecca Tweedie, Nettie Eliza Hayward (Tweedie) Beer, and James Tweedie and his son Thomas Mitchell Tweedie. The contents of the fonds have been divided into 6 sous-fonds and 3 collections.

Collection contains copies of notes on the traditional, folk, and Gaelic songs, from the Maritimes, contained on the discs made by Helen Creighton for the Archives of Folklore Division, Library of Congress, Washington, 1943-44, and 10 audio reels, on which the songs are recorded.

Also includes thank you letter from George Proctor, Professor and Head of Music Department, 1971, to Helen Creighton, for a letter and the transcriptions of the songs collected.

This series consists of documents pertaining to the activities of Eleanor Roosevelt (1884-1962), wife of Franklin D. Roosevelt (1882-1945), in New Brunswick.

Includes - 5 pages of genealogy; copy of deed; newspaper copy of letter to Robert Stevenson from his mother in Scotland; diary of Alexander Stevenson in combination with a record of pupils attending the school in Chamcook starts 1835.