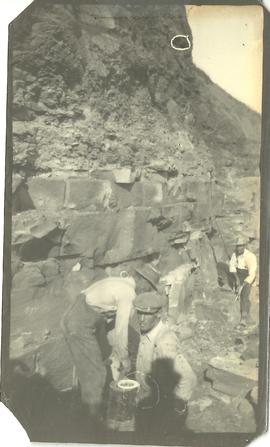 Item is a photograph of a group of men working in an unidentified quarry. 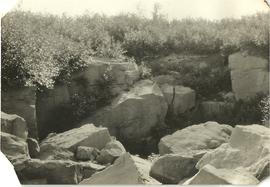 Items are two photographs of rocks at the Wood Point, NB quarry. 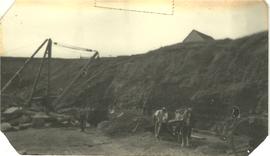 Item is a photograph of men, horses, and equipment being used at the quarry in Wood Point, NB.

This fonds consists of W. J. Bedell's letterbook dating from 1837 to 1838. It contains correspondence to Gilmour and Rankin on the Miramichi and to Robert Rankin in Saint John, NB.

1 photograph of Wilfred Norrad, son of Benaiah Norrad, a cook in the lumber camps, shown with some of his cooking utensils.

1 photograph of Warden Raymond Munn (on far left) with Guide Vincent “Vin” Hunter on far right. Sportsman seated in the center of the photo unknown. Taken in the early 1950's.

1 photograph with 4 copies of Wallace Ward Doak and Charles DeFeo seated outside Doak's Fishing Tackle Shop. DeFeo is believed to be Jack Atherton.