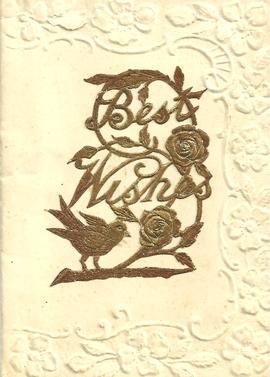 Item is a folded holiday greeting card sent and received by members of the Hicks family. 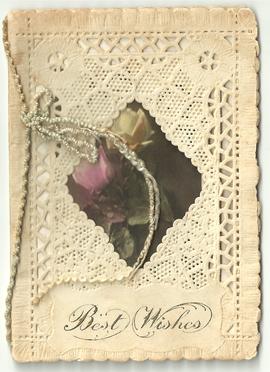 Item is a folded holiday greeting card affixed with string. 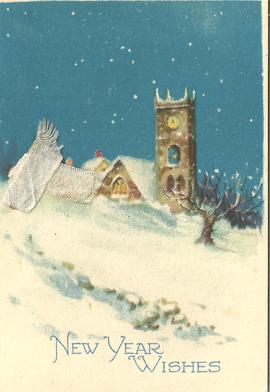 Item is a folded holiday greeting card affixed with string received by the Hicks family.

This fonds consists mainly of correspondence among members of the various branches of Pollok and Gilmour, especially to and from Alexander Rankin of Rankin and Gilmour.

It also includes personal financial records of Alexander and Robert Rankin and North American travel diaries of Allen Gilmour, Jr. and Sr. and William Ritchie, dating from 1828 to 1829, and a report on the proceedings at the Prince of Wales' Challenge Cup competition (1862).

This fonds consists of material from the practice of three generations of Newcastle (Northumberland County) lawyers, chiefly Allan A. Davidson, Jr. The legal documents reflect solicitor's work rather than civil litigation or criminal presentation. It includes material about expropriation by the Intercolonial Railway / Canadian National Railway and the forestry activities of Fraser Company. There are family documents, financial records and land records from 1795 to 1950. An account book belonging to Henry Gerrish, 1837-1840, is included as are the letterbooks of John Ambrose Street, Street & Kerr and Street & Davidson. There is also a journal of John Ambrose Street's voyage to England, 1817-1819.

This account book includes entries on half-pay; business transactions in grain, lumber, foodstuffs, shoes and boots, rum, tobacco, and other goods; and exchanges of labour. It also includes receipts of payments made on accounts and brief entries relating to voyages of the trading vessel the "Mary Salter," specifically, the dates she left and returned to Nova Scotia and her ports of call. Entries are written in several hands other than Robert Salter's, one possibly being William W. Salter's.

The fonds contains the business records of Michael Samuel and his sons, Michael Jr., Joseph J., William E. and Samuel G. A few records relate to the partnership of John Joseph and Michael Samuel, and a number of letters were written to Michael Samuel, Sr. by his nephew, businessman Jonah Samuels of Dalhousie, N.B.

The fonds consists of correspondence; accounts; invoices; orders; receipts; bills of shipping, lading, and exchange; and a few legal records, including agreements.

This collection consists mainly of research notes and writings by Kathleen Williston and others. Her research notes reveal her particular interest in the early history of the Miramichi and surrounding area and its people, the Acadians and First Nations. The remainder of the collection consists of copies of records (with some originals) collected by Mrs. Williston from many sources, several of them relating to the Anglican Church. There are also some originals of early printed publications about the Church.
Included among the latter records, but not limited to them, are the following: Madras School in New Brunswick, 30th Report, 1849, and The 6th Annual Report of the Fredericton Institute for the Education of the Deaf and Dumb, 1889.

This fonds consists of an account book, 1832-1843, and business material including bankruptcy documents and promissory notes.

This fonds consists of records pertaining to the proposed construction of stone buildings at Miramichi, Northumberland County, New Brunswick. Included are the specifications for a guard house, cook house, privies, and well [1827]; a letter addressed to Captain Douglas, Fredericton, from G. Graydon, Captain Royal Engineers, dated at Fredericton, 11 July 1827, enclosing these plans for a subaltern detachment at Miramichi; an estimate for the barracks at Miramichi; and a hand-drawn architectural plan of the proposed subaltern barracks by G. Graydon, dated 1827.