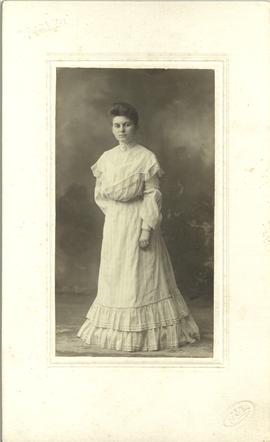 Subfonds contains personal papers of Pauline (Alward) Spatz, including records pertaining to her schooling, her career as a registered nurse, and other personal papers, as well as a group of family photographs dating back to her great grandfather, Isaac Wry, and succeeding generations. Content is divided into four series: Photographs, School Records, Nursing Records, and Other Personal Papers.

Norman Richard was a member of Fredericton Lesbians and Gays and the New Brunswick Coalition for Human Rights Reform. He was employed in Fredericton in the audio-visual services at Communications New Brunswick, part of the Government of New Brunswick and in the 1990s he had recorded the newscasts regarding LGBT issues and the fight for Human Rights as a personal endeavor. The collection consists of three VHS Tapes containing TV Newscasts regarding Gay Rights in New Brunswick and one Beta tape (PB30) containing Studio Interviews. The interviews recorded were for a production entitled Causes Of Prejudice and were pulled at the last stage in the editing for fear of controversy.

Greg Ericson opened The G Club, located at 377 King St., on the third floor, with two business partners on the second week of September 1998; the club closed 4 July 2003.
In 1998, there were no other gay clubs in Fredericton, and Ericson and his partners opened a bar that would serve the community. Ericson wanted a space that offered product excellence (in the form of a variety of liquors and original cocktails), as well as a comfortable / welcoming social space for LGBTQ+ folks. Employees were encouraged to greet newcomers and introduce them to the regular patrons, welcoming them into the space before the dance music began. A competition was held to name the club, and “The G Club” was chosen for its ambiguity: it could be 'The Good Club', 'The Gay Club', but many patrons referred to it as 'The G-Spot', as the club was “on the third floor, and difficult to find”- Greg Ericson.
City by-laws require bars to close their doors at 2:00AM, The G Club patrons would be getting out at the same time as patrons from other clubs- which caused a few fights to break out, and LGBTQ+ folks didn't feel safe returning home. To address this issue, the club would often remain open until the other bar crowds dispersed. Included in the collection are a number of Suspension Notices issued by the New Brunswick Department of Public Safety, for violating the Liquor Control Act by remaining open past 2:00AM. Included in this collection are invoices and a letter from Chippin Ventures Inc. It was Ericson’s perception that Chippin Ventures was particularly aggressive towards The G. Club, looking to bill and fine the business wherever they could.