This fonds consists of correspondence, specifications, patents and notes on Abraham Gesner's geological work. There are records of his patents and petitions for patents as well as specifications and plans for manufacturing kerosene. Some personal papers, including a memorandum of a will, an appointment to the Geological Survey of New Brunswick, and the assignment of a mortgage are included.

Fonds consists of papers compiled while a member of the Mount Allison Board of Regents. They include correspondence, committee reports, financial statements, Academy & Commercial College and School for Girls annual reports, and Post-War Fund Campaign. 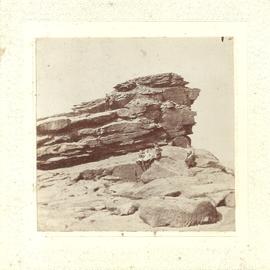 Item is a photograph of a man, woman, and three young girls standing on “Big Head Rock” near Minudie, NS.

Collection includes copies of correspondence, photocopies of names of the men who returned, and of some who died in the conflict. Also an excerpt from the history of the North Shore Regiment including, "The Young Madmen at Zutphen" and a map of Zutphen.

This collection contains articles published in the St. Croix Courier which were part of a series written by F.E. McConvey titled “In-Laws, Outlaws, and Kinfolk”. This series of articles was dedicated to genealogical research into the families of Charlotte County, New Brunswick. Articles could provide advice to readers on how to conduct genealogical research for themselves, but could also contain the results of other people’s genealogical research and the stories of how that information was found.

These fonds contain genealogical documents on the Mowat family of St. Andrews New Brunswick. These contain information on Captain David Mowat and his brother Captain John “Hurricane Jack” Mowat of Orkney Island, Scotland and their descendants.

This fonds contains photocopies of 4 documents relating to the New Brunswick and Nova Scotia Land Company: reports nos. 1 and 2 of the state and condition of the province of New Brunswick with some observations on the company's tract laid before the Court of Directors of the Nova Scotia and New Brunswick Land Company by E. N. Kendall, commissioner, on 31 December 1835; sketch of the proposed town of Stanley now being erected and settled by the New Brunswick and Nova Scotia Land Company showing its present state, dated 11 October 1834; sketch plan with names of the occupiers of houses in the town of Stanley, those having taken lots and intending to build -- also the inhabitants of the houses dated 11 October 1837.

The Mather Byles letterbooks are held as Volume 25 of the Winslow Family fonds. The five letterbooks contain holographic copies of letters written by Mather Byles to Edward Winslow during 1784-1786 when Byles was in Halifax and Saint John. Byles informs Winslow of events in Halifax as they occur and thanks Winslow for his support on both a financial and influential level.