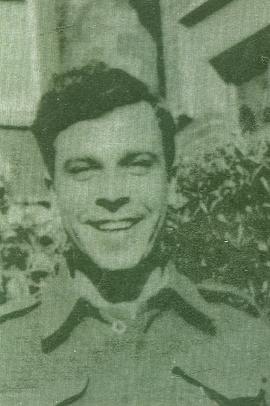 Item is a modern copyprint of a photograph of Leo Leblanc, taken in England at the end of his service in World War II. This item is a reproduction of a photo taken around 1945.

German Settlers on the East Coast

This collection contains an advertisement for a book published in 1998 on German settlers who arrived and settled on the east coast of North America. The advertisement itself contains a brief overview of the story of these settlers.

This fonds contains material related to Grand Manan Natural Historian and Conservationist Allan Moses. It includes a document titled "Moses Genealogy" which features recordings of the lives of members of the Moses family, including an extensive entry on Allan Moses.

This fonds consists of a typed and transcribed interview with Kitty Williamson. She describes her life in Holland during World War II, as well as meeting and marrying Walter Williamson and coming to Canada in 1946.

This collection contains a pair of clippings of newspaper articles published in the Daily Gleaner related to the history of New Brunswick. The first article provides an overview of the story of Marie LaTour, while the second article discusses the history of British Home Children in Canada.

This collection contains articles published in the St. Croix Courier which were part of a series written by F.E. McConvey titled “In-Laws, Outlaws, and Kinfolk”. This series of articles was dedicated to genealogical research into the families of Charlotte County, New Brunswick. Articles could provide advice to readers on how to conduct genealogical research for themselves, but could also contain the results of other people’s genealogical research and the stories of how that information was found.

Henry Kreisel diary of an internment

Photocopied, printed copy of Henrick Kreisel's account of his internment in the camp at Ripples, near Fredericton, from 1940-1941, and the events leading-up to his incarceration.

This collection contains old school handouts which can either be archival in nature or provide interesting information. It includes a handout published by the United Nations Association in Canada which was meant to inform students and get them talking about the political situation in middle eastern countries during 1956.

Collection includes copies of correspondence, photocopies of names of the men who returned, and of some who died in the conflict. Also an excerpt from the history of the North Shore Regiment including, "The Young Madmen at Zutphen" and a map of Zutphen.