These documents were the personal papers of Milton Gregg. They were not the papers of the offices which he held. They include his copies of a few of his many reports from official positions and well as his personal observations to family on several assignments. The Biographical Sketch information above was gleaned from this fonds.

The fonds also included many private papers, including several hundred letters during the First World War to his fiancée in Canada, personal correspondence to family, and observations on his work in Indonesia in the form of letters to his sister. He and his family kept clippings of his exploits from his time as a student at the Provincial Normal School, throughout his life, and until his death and funeral.

After his death, his wife, Erica Deichmann Gregg, continued to add to the collection of clippings. Various organizations kept in contact with Erica Gregg after his death, notably the Victoria Cross Association and the Royal Canadian Regiment Association. Some files continue beyond his death in 1978.

The fonds contains 1656 photographs from ca.1880 to 1988 and cover all aspects of his life. It addition, it contains a number of photo albums, including 2 which were presented to him in Indonesia, one of which graphically shows the affects of yaws on the children in that country. Also in the photo series are images of Gregg with King Edward VIII, King George VI, and Queen Elizabeth II. Although George V presented him with the MC and VC, there are no photos with that monarch. There are also photos with Lord Beaverbrook, Senator John F. Kennedy, Golda Meir and several Canadian prime ministers.

The PANB holds the George Taylor fonds of photographs (P5). 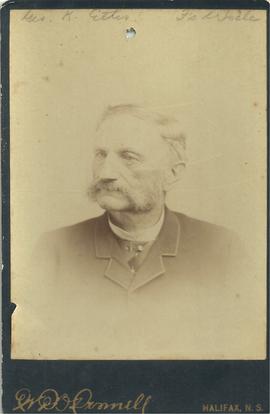 Item is a photographic print copy of an original portrait of George King Etter. Photographed by W. D. O'Donnell of Halifax.

Material related to the LGBTQIA2S+ purge of the Canadian Armed Forces, and Diane Doiron's personal experience.

This fonds consists primarily of histories of the 104th Anti-Tank Battery and the 7th Anti-Tank Regiment Royal Canadian Artillery and supporting materials. Included are a printed history of the 7th Anti-Tank Regiment, a photocopied history of the 104th Battery dating to 1945, and photocopied listings of officers and other ranks, along with the names of fatal casualties, their dates of death, and the names of those wounded in action.