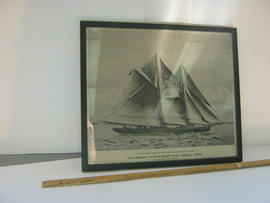 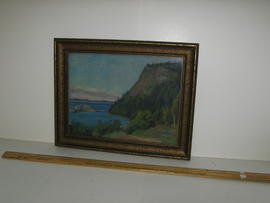 This item is a ledger. Written inside the front cover is :
"Chas. H. Sisson & Wife, Providence Rhode Island 108 William St."
The ledger was used by different people by the changes in handwriting and subject matter.

Some Vessels Wrecked Around Grand Manan Island by Eric Allaby, 1971

The item consists of a map titled "Grand Manan Villages and surrounding Islands by Eric Allaby, 1993." This map shows Eric's love for sharing his knowledge with others and he has published many maps describing Grand Manan and her history.

Herring Weirs Around Grand Manan - Past and Present, by Eric Allaby, 1967, print

Item consists of one map titled "Herring Weirs Around Grand Manan - Past and Present, by Eric Allaby, 1967, print." This print was created to sell as a tourist map. It shows Grand Manan Island, NB in the Bay of Fundy. 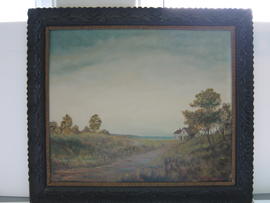 This item consits of a copy of a map of the Grand Manan Archipelago by C. Pettigrew from July 1929. It is black and white with a cloth back and is topographical.

Chart of Compobello with surrounding waters of Bay of Fundy, Dept. of Mines and Technical Surveys Canada

This item consists of one map title "Chart of Campobello with surrounding waters of Bay of Fundy". This is a colour print and longitude and latitude and legend are shown.