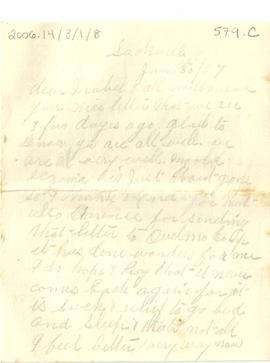 Item is a letter addressed to Mabel and all from her mother, Jennie Grace (Snowdon) Wry, dated January 30, 1927. 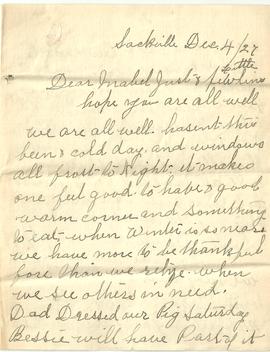 Item is a letter addressed to Mabel from her mother, Jennie Grace (Snowdon) Wry, dated December 4, 1927. 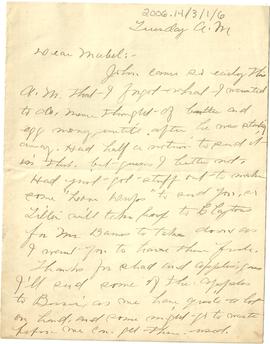 Letter from Aunt Mame to Mabel

Item is a letter addressed to Mabel (Wry) Alward, sent from Mary Elsie Wry (“Mame”), probably written between 1924 and 1928. 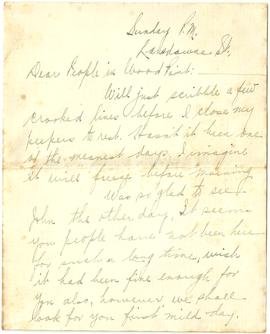 Item is the last letter that Mabel Alward received from her sister J. Pearl C. Wry before her death in 1923. The letter was sent from Lansdowne Street, Sackville, NB to Wood Point, NB. Original envelope included.

Letter to the Alward Family

Items are three letters within the same envelope, written to John, Mabel, and Pauline Alward. The first, dated February 13, 1927, was sent from “Mother”, Jennie Grace (Snowdon) Wry. The second, dated February 19, 1936, is addressed to “Dear Folks” on the front, and signed “Dad” [John Willard Wry], and on the back is a note addressed to Pauline from “Gran” [Jennie Grace (Snowdon) Wry] The third, dated April 1, 1936, is addressed to “Dear Folks” and was sent from “Dad” [John Willard Wry]. 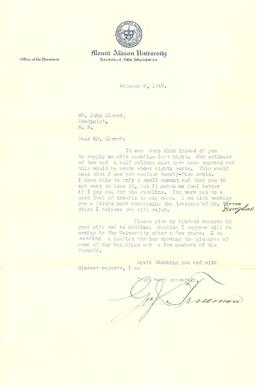 List of personal "rings" for the Kingston Peninsula Telephone Company

A list of long a short rings used by the Kingston Peninsula Telephone Company to signify the recipient of a call.

A photograph of a man performing maintenance actives.