This fonds contains a journal dated 1850 kept by William N. Smith during his voyage to Liverpool, England and back to Saint John. It provides details of daily life aboard ship and a record of the weather and setting of the course and sails. There are detailed illustrations, in both pencil and ink, of the "Susan" and other ships passed at sea as well as lighthouses.

This fonds consists mainly of legal documents and correspondence pertaining to William M. Connell's career as a justice of the peace. Legal documents contain deeds, notice of mortgages, marriage bonds, court cases, and agreements. There are land grants owned by William M. Connell including information on the name of the county and parish, acreage, lot number, and date of registration. Correspondence includes contacts with business associates and family members.

This fonds is the material associated with Mahood's job as land surveyor. It includes diaries of activities, book of tables and astronomical observations, field journals of sketches, plans and descriptions of grants and land holdings. There are survey and inspection reports of sawmills and logging operations as well.

1 photograph of William Hazen ("Pup") Lyons, owner of The Lyons Den. He was inducted into the Atlantic Salmon Museum's Hall of Fame in 2004.

The William Lusk Webster collection, with the exception of a few personal papers and the items collected by Ralph Hewson (the Webster family lawyer and a local historian), covers the years after Dr. Webster's return to Shediac (1950). The collection includes correspondence and notes on the Fort Beauséjour Museum, Shediac; Acadian history; and the New Brunswick Museum. There are land grants and transfers with related notes and correspondence. 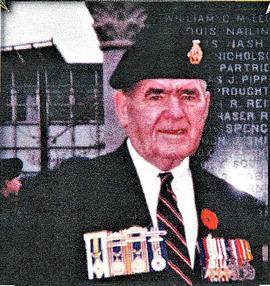 This fonds consists of a short colour print-out of William Lewis' biography.

This fonds contains a single item, a letterbook (231 p.) dating from 5 March 1849 to 13 May 1852 from the office of the inspector and superintendent of police in the city of Quebec, William K. McCord. It includes correspondence to and from James Dean, president of the Quebec Board of Trade, and the Honourable James Leslie, provincial-secretary.

Fonds consists of photographs, certificates, and correspondence pertaining to William Jack Dibblee. Photographs include two portraits of an unidentified man and woman, both formal and informal poses of unidentified individuals, and landscape photographs. There is a 1955 letter to William Jack Dibblee from Hugh John Flemming concerning Dibblee's retirement as a county councillor, and certificates consisting of confirmation, Dibblee's 1959 Masonic Lodge certificate, and Dibblee's 1911 marriage announcement to Grace Dibblee.