Bertha Gregory's journal offers details of her work at the port of Saint John during the winters of 1920-1921 and 1921-1922, particularly with respect to the Red Cross nursery located in the immigration building, Saint John West. She records names of ships arriving; the number of adults, children, and infants aboard; and the ministrations performed.

A number of photographs depicting places and people she worked or served with during her 1919 trip West on Red Cross Train Service for soldiers' dependants, are pasted on several journal pages. Also pasted inside the journal are photographs of Bertha Gregory, her assistants, acquaintances, groups of immigrants, and immigrant children, as well as newspaper clippings, a Canadian Red Cross Society report, and a few letters all relating to her work as a port nurse at Saint John or Québec. There are also samples of Red Cross information cards, in several different languages, which were distributed to arriving immigrants to assist them in locating health care for their families.

The fonds also includes one list each of medical supplies and nursery supplies, several summaries of work performed, several articles about the port nursery, and a pamphlet offering detailed instructions to nurses serving on trains under the Canadian Red Cross Society. A number of newspaper clippings providing biographical information on family members, notably, Bertha L. Gregory; her sisters, Lyla and Clara; her mother, Henrietta; and her grandmother, Susan, are included in the fonds.

Eleven photographs of Bertha Gregory, of the immigrant room and nursery at Saint John (1920s), of Halifax following the explosion (1917), and of Bertha en route to western Canada (1919) accompanied this fonds. They are located in P357 (nos. 25-35).

Part of R. Chestnut and Sons

This collection consists of one bound volume of copies and microfilms. It contains the correspondence of Charles Inglis and John Inglis with their superiors in England and their missionaries (Anglican) in the field. There are also extracts from each man's journals. The bound volume includes an introduction probably written by W. O. Raymond.

This is a programme for a Black Watch Regiment event held on 6 June 1970. 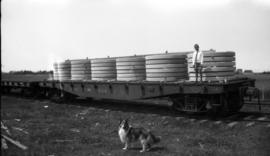 Boy standing with grindstones ready for shipment by rail, dog in foreground.

Original letters and attached news clippings received from Mrs. Brenda (James) Ford, Coppastiona Tree Farm, R.R. #3, Moncton, (Stoney Creek) NB to the Department of Transportation (often the Deputy Minister) and copies of the responses sent to these letters, 1967-2007. She and her husband ran a tree farm and were very interested in rural beautification. Some of the letters were prompted by the actions of their neighbours who had brought unsightly buildings to their properties or buildings which were obstructions to safe motoring.

Dominant themes in the letters include an issue regarding the paving of a highway interfering with the Ford's driveway, complaints regarding the Petitcodiac River Dam Causeway, and issues regarding the Gunningsville Bridge. Other topics include building removal from highway right-of-ways (particularly the Helen Steeves (McGrath) house in Moncton), signage regulations on highway right-of-ways, frog crossing signage, easements of right-of-ways, controversy regarding changes to the Weldon highway (includes deed and mortgage for Hartley property), forestry consultation, elections of MLAs particularly the Confederation of Regions (CoR) party (1991), criminal activity in the Ford’s neighbourhood and an RCMP inquiry, mail theft, billboards, tractor-trailer roof icing, harassment by tractor-trailer drivers of female drivers, beautification of Route 114 (includes poem), the Adopt-A-Highway program, railway transport (CNR and CPR), NB usage of gravel trucked from Quebec and its relation to the spread of ragweed, Protected Areas Strategy for forested areas, paving of Highway 114 (includes photos), and drinking and driving of a neighbour of Mrs. Ford. There is also correspondence regarding continuing confidentiality where Mrs. Ford explains how she protects the security of her letters (1991).

There is also a copy of “Terms of Reference: A Risk Assessment and Emergency Response Program for the Corridor Road Passing Through Baker Brook, Verret, and Saint-Jacques Watersheds” from the NB DOT, 1993, including maps, and obituaries of James Amos Ford (1882-1979) and Brenda Ford (1921-2012).

The fonds contains printed informational literature and owners' manuals and over 7000 detailed plans and drawings of the Bricklin car.

The fonds consists of three notebooks containing engineering data recorded while C. F. Camber was working in the vicinity of Woodstock, N.B., in 1938. They include figures, notes, and sketches relating to excavations and embankment, railways, a roadway, ditches, canals, and other projects.

A roll of oversized plans, tracings, and graphs was transferred to the Map Section.

This fonds documents the activities of the New Brunswick branch of the Canadian Forestry Association, from its organization in 1939, and sheds light on the workings of the national body. It consists of correspondence, minutes of meetings of the provincial and national bodies, reports, briefs, research papers, submissions, financial statements, copies of speeches and radio talks, and a copy of the constitution. The fonds also includes scrapbooks, newsclippings, and printed material, as well as a copy of T. M. Pond's "Summation of activities of the Canadian Forestry Association of New Brunswick, 1939-1976". Also includes a Prospectus of the Maritime Forest Ranger School (1966)