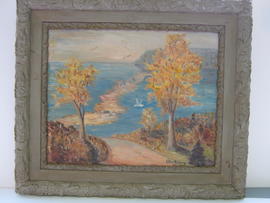 This item is a painting of Dark Harbour on Grand Manan. The view is from the hill on the southern end looking down on the harbour in the fall. There are buildings on the seawall and gulls flying. 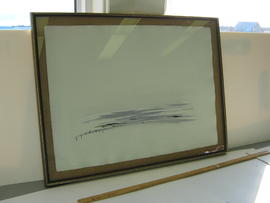 This item is a painting on arches watercolor paper showing a small amount of blue water. 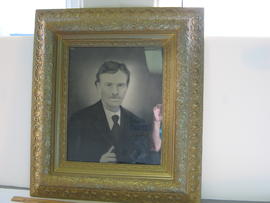 This item is a gold gilded elaborately framed, black and white solar print of Leon Jason Green as a young man in his 20s. The frame is built up with many layers of frames all highly carved. 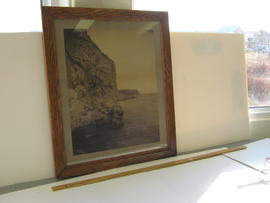 This object is an enlarged sepia photo of the northern shoreline on Grand Manan Island, NB. The image shows a man standing on a point of land and a dory on the rocks near him. He is standing at the base of the rock formation called "Seven Days Work". In the background, you can see "Ashburton Head" and "Buttermilk Rock". 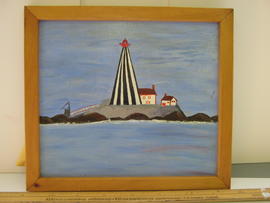 This item is a framed painting of Gannet Rock Lighthouse. It is painted with oil paint on Mason Board. The image shows the black and white vertical striped lighthouse and the white with red trim keeper house and outer building. Also visible are the rocks the lighthouse sits on and the walkway to the landing area with the hoist for landing supplies. 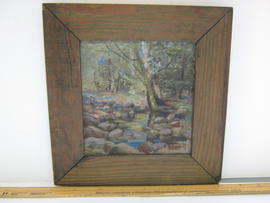 Garden of Eden by Wesley A. Griffin 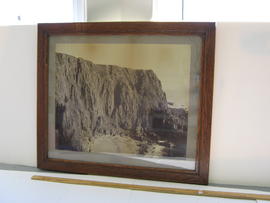 This object is an enlarged sepia photo of the southern shoreline of Grand Manan Island, NB. The image shows a man standing on top of the 300+ foot cliff. From the angle of the photo, the photographer would have been half way down the cliff on the next peninsula. There is a beach at the bottom of the cliffs with the edge of the water being foamy from crashing on the rocks. Printed in the bottom left corner of the photo is "Copyrighted 1889, H.G. Peabody, Boston". 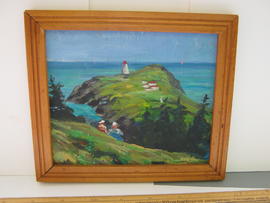 This item is an oil painting of two people sitting on grass on the cliff overlooking Swallowtail Lighthouse and keeper's houses in the distance. The painting has chips of paint missing. It is painted on a purchased canvas board. The frame is grooved wood. 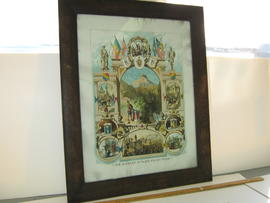 The Altar of Pythian Knighthood, print

This item is a framed color print titled :The Altar of Pythian Knighthood". It shows an archway with a man at a podium looking out to a mountain. Above the archway are many flags. There are different images inset around the archway. The frame is a heavy dark wood varnished, plain flat boards - nothing fancy. 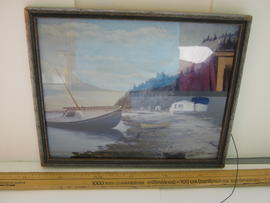 This is a framed photograph of a painting of Dark Harbour with a half shipwreck hull on the shore. There is a yellow dory on the shore and cottages along the edge of the woods at the high water line. On the back of the framing Gleneta has written "Artist Nelson Greenlaw. Belongs to : Gleneta Hettrick Grand Manan" When the photo was hung at the Art Gallery the frame was fixed and the picture was removed. On the edge of the photo, under the frame edge is the last letter of the signature of the artist which the photo cut off. The letter is an N. Nelson Greenlaw and Steve Kinghorn were contemporary island artists who studied under Wesley Griffin. Their styles are similar.