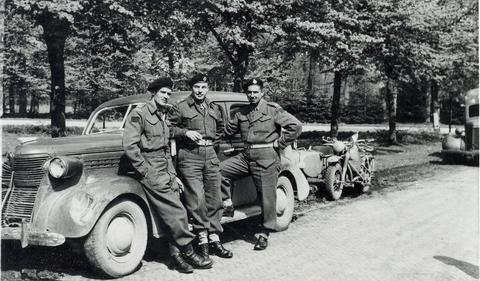 His full name was William Alexander Reginald Hay. He was given the nickname Ray during the war. He enlisted in August 1941 in Sault Ste Marie, where he trained as a driver in the 3rd CACRU. He was later transferred to the 8th NB Hussars as a Gunner. In 1942 he was sent to England for training and on 1 Dec 1943 went to Italy there he saw action in Liri Valley. In the Valley their tank hit a mine causing it to exploded and catch fire. They lost their Sergeant, Reg was injured in both legs and was in the hospital in Rome. After he was transferred to the Calgary Tanks. After D-Day he returned to England and in August of 1945 he was sent to Holland to help repair their homes. We were married in Sheffield in Oct 1945. Reg came back to Canada December 1945 and I sailed July 7th 1946 on a Troop Ship SS Georgic, we docked in Halifax. In July 1962 Reg and I made a trip back to Italy. I went to the Commonwealth Cemetery to Lay 2 wreaths, one for the Sergeant and me for our legion branch 429. And on our way home we visited in Holland the 2 families we billeted with in 1945. They were so happy to see him. My Dear Reg passed away in 1974 at the age of 55 from a brain tumour. I find the Sabretache so interesting I wish I was closer to see some of the activities especially the curling events. I retired 2 yrs ago from curling. Yours truly Jean Sharp (Hay)

Series consists of a Leave pass for W. A. Hay , playbill and information from Holland. Church Service Programs 1945, Eelde, Holland including photocopied photographs.