Fonds consists of early art works of Edwin Tappan Adney including cast and life drawings completed while he was a member of the Students Art League in New York around 1885-86. Fonds also contains other drawings, sketches, and notes on historical heraldry.

This fonds documents Stuart Trueman's literary career as author of books and articles published nation-wide between the late 1940s to the 1990s. It also documents his career as a reporter, editor, and columnist with The Telegraph-Journal and The Evening Times-Globe from the late 1920s to 1993. In addition, the fonds reflects his activities as a public speaker and as a member of several committees, most notably, the Roosevelt Campobello International Park Commission. It also reflects his work as the Bank of Canada's New Brunswick representative for its Canada Savings Bond campaigns. As well, this fonds contains some of Mildred Trueman's correspondence and financial records.

It includes incoming and outgoing correspondence, research materials, speaking notes, travel itineraries, newspaper clippings, minutes, report,s and personal mementos. The fonds also includes handwritten, typed, and published copies of Trueman's articles and columns as well as handwritten and typed copies of his books. Graphics include photographs, negatives, cartoon illustrations for books, promotional posters, proofs of book covers and original dust jackets. Artifacts that accompanied this fonds have not been processed and include invitations to various formal functions and certificates of appreciation.

This fonds documents the production and distribution of The Mysterious East. It also reflects the political activities and left-leaning sympathies of the editors, and suggests the leading social and political concerns of the day.

Headquartered at Fredericton, NB, the magazine published editorials and articles primarily about Maritime issues from a local, but alternative perspective. These articles covered a wide range of topics: pollution, housing, censorship, birth control, drugs, police policies, and native problems. A popular monthly feature announced the recipient of the Rubber Duck Award. The Duck was usually given to public officials who, according to the editors, demonstrated "conspicuous knavery or incompetence or stupidity."

A homemade scrapbook fashioned from coloured paper and filled with photographs, news clippings, and stickers. Most of the scrapbook's contents are newspaper clippings containing information on the community, such as marriages and deaths, as well as poetry. 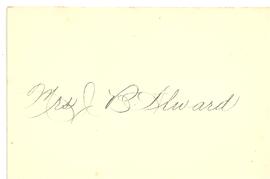 Item is a copy of the Argosy Weekly from November 1952. On the cover is an article about Pauline entitled, “U.G.R. Nurse Leaves”, which discussed her acceptance of the position of Evening Supervisor at South Oaks, The Long Island Home, Amityville, Long Island, New York. 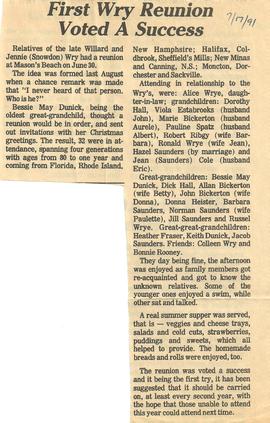