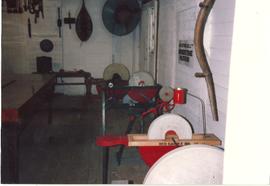 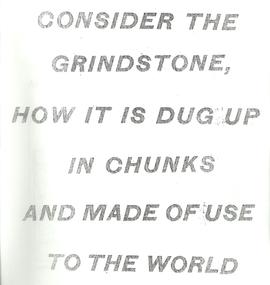 Item is a photocopy of a front page newspaper spread from the St. John Standard discussing the Read family, the grindstone business, the quarry at Stonehaven and related topics.

The fonds contains guidelines and outlines for radio and television interviews that Harry Hagerman conducted on a number of topics related to the folk history and culture of New Brunswick, taped interviews and their transcribed texts, sketches, newspaper clippings and miscellaneous material that Hagerman collected during his reporting and investigations or research.

This fonds documents the literary career of Harry Howith. It includes incoming and outgoing correspondence, manuscripts, typescripts of college essays and poems, and published material.

A history of the Kingston Peninsula Telephone Company taken primarily from their minute books.

How to build rural telephone lines

An excerpt from a book that concerns the construction of rural telephone lines.

Item is a video recording of Jack MacKenzie on the television game show "What's My Line?" which aired from 1950 to 1967

This collection contains some of the listings of historical materials compiled by James Hannay in the first decade of the 20th century. It includes handwritten and typescript lists of documents of government offices and government bodies in New Brunswick -- Auditor General's office, the Crown Lands office, the Executive Council, the House of Assembly, the Legislative Library, the Lieutenant-Governor, and the Provincial Secretary.

It also includes listings of records of the Clerk of the Peace, Registrar of Deeds, Registrar of Probate, and other administrators of the counties of Albert, Carleton, Charlotte, Gloucester, Kent, Kings, Madawaska, Northumberland, Queens, Restigouche, Saint John, Sunbury, Victoria, Westmorland, and York in New Brunswick.

The collection also includes similar listings of records of civil administrators of Nova Scotia and Prince Edward Island as well as Hannay's working notes, copies of his correspondence with the Dominion Archivist (1909), a sketch of the career of L. A. Wilmot, and copies of "Journal of Acadia, 1694-1695" by M. de Villebon and "La Mothe Cadillac," a memoir relating to Acadia and New England.