This fonds consists of a typed history of the Saint John suspension bridge with a copy of a photograph of the bridge. This history was previously published in the New Brunswick Historical Society Collections (No. 10, p. 104). There is information on early attempts to build a bridge across the harbour connecting the east and west sides of Saint John, including dates and names of the individuals involved in building the suspension bridge. There are technical details of the construction of this bridge as well as general discussion of suspension bridges including one in Wales and the first Brooklyn Bridge in New York. The report of the inspecting engineer, Alexander L. Light of St. Andrews, is included in this history. Names of stockholders of the Saint John Suspension Bride Company are provided as wel as a few details about bridge finances. Also included is an account of a violent storm that badly damaged the bridge in May 1858 and nearly caused a tragedy.

This fonds consists of copies of church records. There are membership records including a covenant, lists, and meeting schedules, 1822-1849; and letters of transfer, 1853-1899. There is a membership list of the Hillsborough Women's Missionary Aid Society, 1878, and their minutes, 1875-1926. There are also the constitution and by-laws of the Young People's Society of Christian Endeavour, 1891, and records of the building of a new church, 1910-1912 .

This fonds consists of the business records and correspondence of James McLeod in his role as master of 11 vessels. There are 11 series, one for each vessel. There is also a handwritten notebook, "Specifications of an Iron Sailing Vessel," giving 48 pages of detailed specifications for building and filling up an iron barque. The volume is undated but appears to come from between 1830 and 1860. 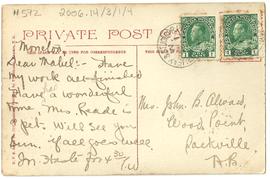 Item is a postcard sent to Mabel (Wry) Alward from her sister J. Pearl C. Wry. The message reads, “Have all my work finished. Have had a wonderful time. Mrs. Read is a pet. Will see you Sunday if all goes well. In haste for 4:30. P.W.”