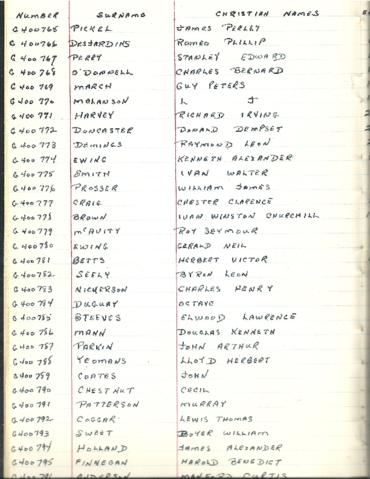 This series consists of 3 cm of textual records.

Mrs. Mary Bickerton was born on November 14, 1926 in London, England, she was the daughter of the late Frank and Florence (Hazell) Deegan. She came to Canada as a war bride in 1946. Her husband was Sergeant Gordie Bickerton, a member of the 5th Armoured Regiment (8th Princess Louise's New Brunswick Hussars). She served for 16 years postwar in the Canadian Army Militia. She was a lifetime member of the Royal Canadian Legion, a past President of the Sussex Branch # 20 as well as the 8th Canadian Hussars (Princess Louise's) Association. Mary served as a director for King's Manor and the Kiwanis Nursing Home. She was a member of the Trinity Anglican Church Choir.

These documents belonged to Mary Bickerton. They were donated to the 8th Hussars Museum by Michael Bickerton in January of 2020.