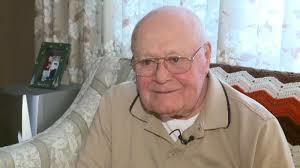 This subseries consists of 5 photographs

Jack Trueman spent many years with the 8th Canadian Hussars. He was named as an Honourary Lieutenant-Colonel of the Regiment. In 2014, he was reunited with the dog tags of hi grandfather who had served during the First World War. Jack's father was Stephen Edward Trueman, born 1907 in Campbellton NB. He served four years during the Second World War.